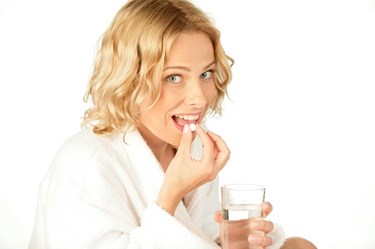 Half of all patients fail to take their medications correctly, according to a 2010 report by the World Health Organization, due to problems such as overuse, underuse or misuse of prescription or non-prescription medicines. This poses possible dangers, as mixing medicines could adversely affect someone's health, and not taking medicines in the correct dosage can lower the ability to fight off disease.

Patients need to take their prescribed medications and some of them may need a bit of help doing it. Those who take multiple medications may have a difficult time remembering which pills they need to take in what order, and at what time each day. Other patients may experience discomfort, or adverse side effects, from some of their meds. Is there a way to save money and improve health care by discouraging patients from mixing up drugs, missing doses or not taking medicine at all?

Intelligent pills could track patients' medications
Helius is the name given to intelligent pills developed by Proteus Digital Health (formerly Proteus Biomedical), based in Redwood City, Calif. These pills have sensors imbedded in them, which include copper and magnesium, allowing the two metals to create an electric charge -- as in a school experiment with potato batteries. An electrical current to power the device is generated by stomach acid. Andrew Thompson, the chief executive of Proteus, told Nature, "If you swallow one of these devices, you are the potato that creates the voltage, and we use that to power the device that creates the signal."

This signal is transmitted to a patch that is placed on the skin of a patient. This patch can monitor the use of medication as well as heart rate, temperature and respiration. For people who are worried about swallowing a sensor to monitor their health, it is about the size of a grain of sand. The currents generated to power the sensor are not likely to harm the human body, and most of the product is composed of materials found in food. The patch that helps collect the information is like those used for electrocardiogram machines that monitor heat rate through electric currents. Patches are designed to be worn for seven days before they need to be disposed of and replaced with a new one.

How can doctors use this new technology?
Readings from edible tech could help doctors gain real-time data on a patient's response to changes in medication, including adverse reactions. Observing medication use and patient vital signs could help inform doctors on whether to change a particular medicine or the dosage. Data from the pill and patch can also be transmitted to smartphones and shared with anyone the patient chooses. This could make health care a family affair, or help caregivers who are responsible for elderly patients.

In the World Economic Forum blog, Proteus CEO Thompson pointed out that about 5.5 billion people have mobile phones. According to BioCentre, Thompson suggested that more than 85 percent of the world's population has the ability to keep digital tabs on the state of their health.

Health tech innovations like Helius could provide health care professionals with better information on how medications affect patients. Thompson told Nature that the goal is to make sound recommendations for patients: "The most important and basic thing we can monitor is the actual physical use of the medicine."

What's next for edible tech?
Proteus Digital Health partnered with Lloydspharmacy, a United Kingdom-based company, in 2012 to help sell products overseas. Proteus has ties to health care companies, including Medtronic and Novartis, as well as high-tech firms such as Oracle. Neil de Crescenzo, Senior Vice President and General Manager of Oracle Health Sciences Global Business Unit, discussed the integration of Proteus technology into Oracle's cloud-based clinical trial platform. In a press release, de Crescenzo remarked,"... investigators and patients worldwide require continuous, precise and near real-time information on what medicines are taken and the patient's physiological response when inside and outside of a clinical setting."

Proteus has permission to sell its product in the UK. The U.S. Food and Drug Administration approved the use of the intelligent pill in 2012, based on studies illustrating that it was safe and effective in placebo form, but this did not extend to its use in conjunction with prescribed drugs. In a 2013 press release, Proteus notes that the FDA has given market clearance in the U.S. for wearable and ingestible sensor device technology. Thompson told The Wall Street Journal that its first digital drugs should be available in 2014 or early 2015.

Health tech to the rescue
The UK's National Health Service reports that an estimated £400 million is lost each year through unused medications. Making sure that patients take the medication they are prescribed could potentially cut back on these losses. Being able to quickly determine when a drug isn't working and switching to a more effective one could save money as well. Bloomberg Businessweek estimates that the U.S. health care system could save up to $289 billion a year with technology to help patients take their medications as prescribed.

Innovations like Helius could also foster more collaboration between health care professionals. Pharmacists and pharmacy technicians might have medical data transmitted to them so they could work with doctors to find solutions to medication problems. Individuals who work with the elderly, such as long-term care or home health care providers, could also use this technology to better care for their patients and monitor their health and medication intake. With technological discoveries like smart pills, health care systems might be able to save money while providing better care for patients.

About the Author
Jamar Ramos has been writing poetry and fiction for many years, and earned his bachelor’s degree in Creative Writing from San Francisco State University. For the last three years, Mr. Ramos switched to producing blog posts for CBSSports.com and writing professionally as an independent contributor for a number of Internet sites. His creative works have been featured in The Bohemian and The San Matean. He now contributes articles for OnlineDegrees.com, OnlineColleges.com, and AlliedHealthWorld.com.

This article is originally published on AlliedHealthWorld.com